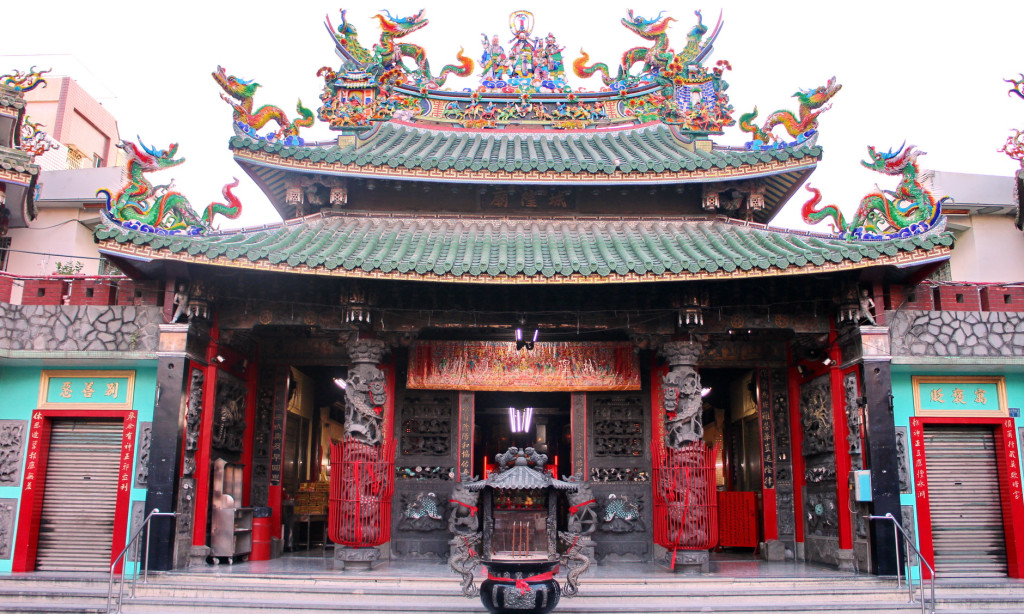 The temple, rebuilt in 1968, was originally completed in 1704 and was just a cottage on the Pizihtou in Fongshan County.

During the Japanese colonial era, in order to promote its colonization policy, the Japanese government burned down the temple. However, the main statue remained unhurt. The golden main statue was about two hundred cm in height with movable limbs. After the World War II, the Japanese Government was collecting metals but still not dare to destroy the statue.左營鳳邑舊城城隍爺The Zuoying City God

The golden statue, created by a Chinese sculptor, is the largest City God statue in Taiwan. Unlike other City God statues in Taiwan, this wooden statue has movable limbs because of the tenons inside. The palanquin of the City God was originally made of metal, but was later melted by the Japanese government to manufacture weapons. Therefore, in 1918, the palanquin was remade with black wood.

Inside the temple, there is a giant abacus on the beam of the temple. The abacus was carved with three words "Ask Your Heart" to remind the visitors to ask themselves if they have done things right when they enter the temple.

In addition, there's a couplet written by the honored scholar Jhao-Chang Jhuo in 1741. The main idea is: "Good deeds will be paid off with properity. If not, then your ancestors must have done something bad. When you pay off their debts, prosperity will come to you. Evil behaviors results in destruction. If not, your ancestors must have left you virtues. When their virtues are out, you will face destruction." This couplet indeed expresses the Chinese traditional karma concept and reminds everyone to always perform good deeds.
Back